French press is a coffee brewing method like no other. It is a blend of french charm, elegance and a bit of magic, as well as an example of immersion brewing technique. It is also more permissive compared to other brewing methods, and thus suitable for beginners. Coffee connoisseurs respect and praise French press as well. If done right, the coffee you get from the press is full-flavored, smooth, oily, natural. Give it some love and a little patience, and you will master it quickly.

A lot of legends and mystery exist around the origins of the French press. Was it invented and produced in France or by french? William H. Ukers wrote in his book “All About Coffee”, published in 1922, that “the French devoted more attention than any other people to coffee brewing”. “All About Coffee“ can be called an encyclopedia of coffee of the 19th century. Ukers described dozens of coffee making devices invented in different countries through the century, but by that time, a french press-like device we know today was not in his catalog.

Nevertheless, the patent records show that the coffee press story has started by French and continued with a notable contribution of Italians and Swiss who perfected the french press design to the level we have today.

Here are the most important events in French press history.

A Paris metalsmith and a merchant Mayer and Delforge received a joint patent for “the filtering of coffee by means of a piston.” Their design was a little different from the device we know today and the carafe was not sealed completely, but the concept was the same. Their invention could be the grandparent of the simple and beautiful coffee maker we know today.

Italian designers Attilio Calimani and Giulio Moneta were the first to patent coffee press schematics in Italy, their design looks much closer to devices we use nowadays.

The biggest jump towards modern design and the popularization of the coffee press was made by a swiss inventor Faliero Bondanini. He not only significantly improved the Calimani’s idea, and especially the filter, but also started the French Press in metal in 1958 on a French clarinet factory called Martin S.A. His brands name was “Melior” and one of the classical models he produced had a sound name - “Chambord”.

Bodum, a danish company, purchased Martin S.A., along with the production line of the original coffee press maker ”Melior”. Today Bodum is one of the most recognized french press manufacturers in the world with its flagship product - Chambord.

We should also mention Bruno Cassol, who patented his own improved coffee press version on February 1935, as well as Hector G. Zoia, an inventor who presented his modifications to the filter in December 1939. Both tried to refine the Calimani’s design and especially the filtering mechanism, but Bondanini was the one who succeeded to launch the first french press mass production.

What is a French Press and How Does it Work?

The device consists of a cylindrical pot and a plunger with an attached mesh filter. When the plunger is pressed down to the bottom of the pot, the built-in filter pushes hot water through ground coffee, separating coffee grounds from liquid.

Before we move to the brewing steps, let’s take a closer look at the brewing process. French press uses immersion brewing method. What does that mean? While making drip coffee or pour over the water flows through coffee grounds, in contrast, french press does its job by steeping coarsely ground coffee and hot water in a beaker. After the steeping process is finished (usually after 4 minutes), a plunger with a metal mesh filter comes into play. Slowly pressed down to the bottom of the beaker it separates the liquid coffee from the grounds. Only tiny particles and natural coffee oils pass through the filter making your drink full bodied, oily and rich in flavor. Few brewing methods can compete with the coffee press in terms of coffee texture and thickness.

How to Make French Press Coffee

For this guide we used 4-cup 17oz French press (0.5 liters). For a press of this volume you will need 15oz (0.45 liters) of water and 32 grams of coffee beans. If you plan to use a tablespoon to measure coffee — 32 grams of coffee equal to 5 level tbsp of coarse grind coffee. Our proportions of water and coffee correspond to 1:14 coffee to water ratio, with one part of coffee and 14 parts of water. 1:14 ratio will give us a drink of medium strength. For a plunger pot of different size use our french press calculator to get the right water and coffee proportions. 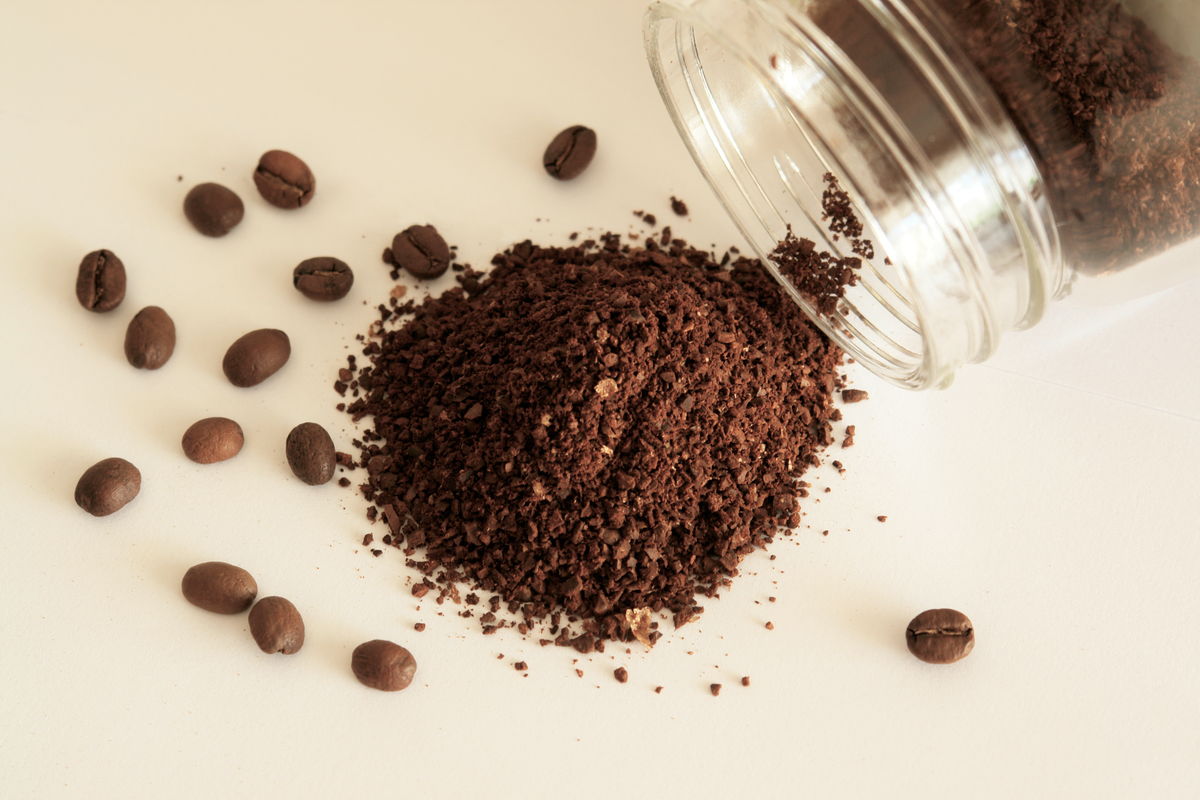 2. Boil water and preheat the press

Heat up water to 200F (93C) if you are using a digital kettle like we do or boil the water in a kettle and let it cool down for 30 seconds, then preheat the French Press, including the plunger and the filter.

3. Add coffee to the pot

Take out the plunger, if it’s still in the press pot after preheating, and add ground coffee to the pot. Shake gently to distribute coffee grounds evenly on the bottom of the beaker.

Start the timer and pour water into the press. Do it in circular motion until the press is half full, without hurry, making sure all the grounds are wet. Enjoy the bloom and move to the next step after 30 seconds. 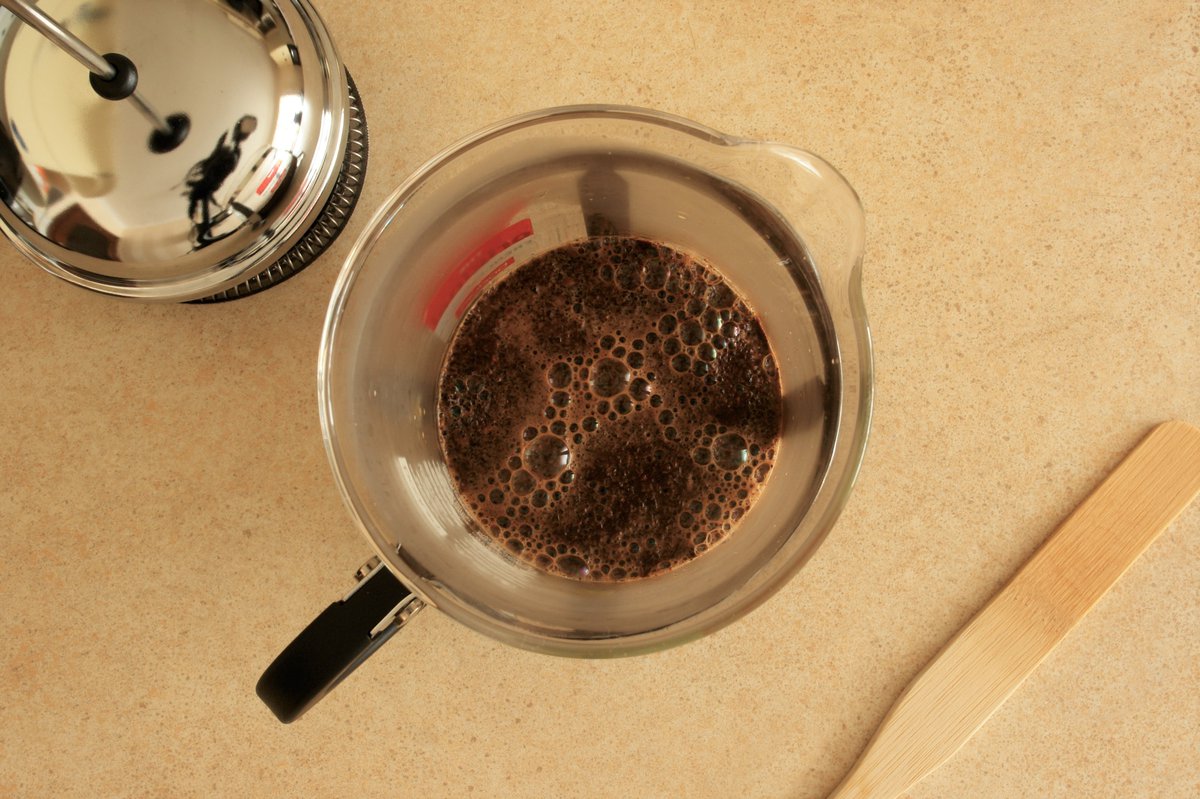 Use a chopstick or a spoon and stir the contents of the press softly making coffee particles dance the bourrée. This will help grounds to go to the bottom of your French pot and extract evenly. 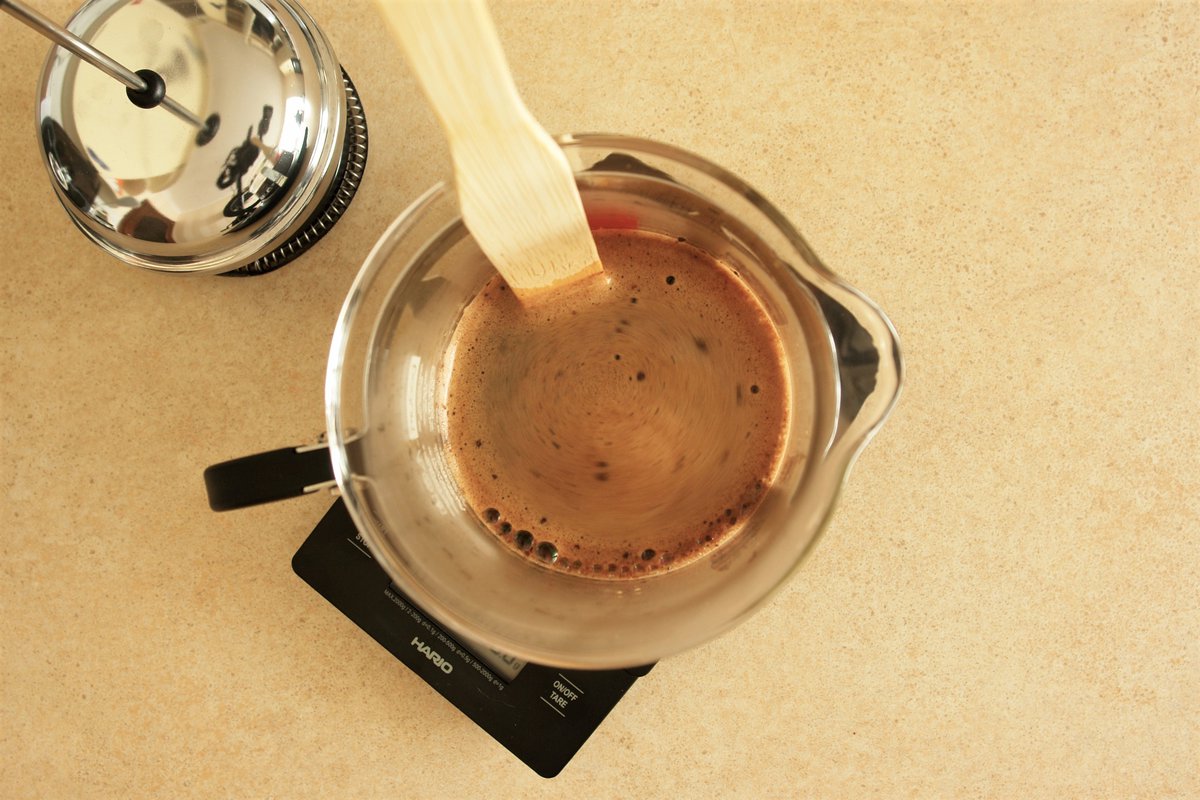 Add the rest of the water. As always, pour evenly. It is better to use a kitchen scale to make sure you add exactly the amount of water you planned at start. In our recipe it should be 450ml of water in total + 32 grams of coffee

Reinsert the plunger but do not push it yet, make sure the mesh filter stays just above the water. Wait for the rest 3 minutes 30 seconds.

8. Press down the plunger

Finally, you now have 4 minutes on your timer, press down the plunger to separate the grounds from the liquid

Now you can serve your coffee. It is important to decant french press coffee right after the brewing to avoid over-extraction and bitterness. Just pour directly to cups or to a separate carafe.

That's it! Enjoy your drink!

How to brew better from start? Beginners often underestimate the importance of one or another point when brewing with a french press and get mediocre results - muddy and bitter substance instead of a cup of a divine drink. You can avoid common brewing mistakes and brew delicious plunger coffee from the first cup.

We went throught brewing steps and tips, you are already an advanced french press brewer! Sooner or later you will want to adjust the strength of your coffee or brew for your friends or family. That's where our coffee to water ratio calculator may help. Designed especially for french press, you can adjust the recipe according to your pot size or taste and get instant instructions.